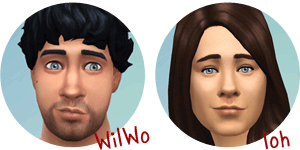 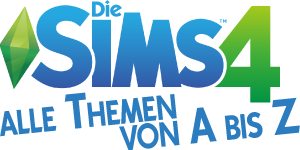 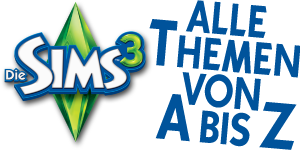 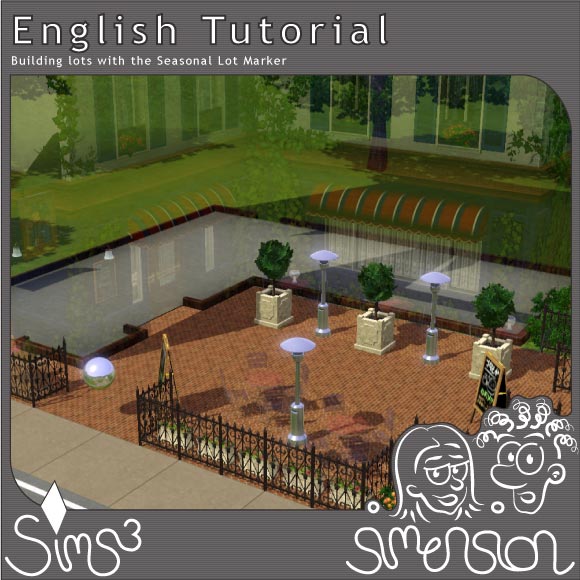 The Seasonal Lot Marker allows a lot to switch objects and decorations depending on the season. Using it on community lots offers your Sims different attractions every quarter of a year.

Using the marker on your residential lot enables seasonal decorations without the necessity to store objects temporarely in the family inventory.

For this tutorial I am going to edit the Little Corsican Bistro at Sunset Valley.

It's good to have a plan of the seasons depending objects you are going to use: Is it just small decoration oder large activity objects like roller skating (Seasons) or Riding the Bull (Showtime). Include enough levelt terrain for those objects.

For the Little Corsian Bistro I am just going to change some table decorations, flower boxes and sandwich signs. This is the common look of my terrace, that will be shown as base for all seasons. In the lower left corner you can see the silver ball of the Seasonal Lot Marker: 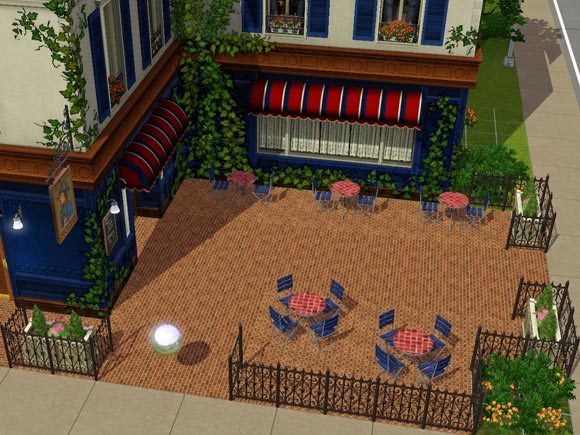 The Seasonal Lot Marker is located at the debug buy menu. Enter the cheats TestingCheatsEnabled true and BuyDebug into the cheat console. Search for the silver ball under buy mode > sorted by function > debug > Misc Objects. It looks like other marker balls - please make sure it has the correct name:

If you set your lot type to the new Festival Grounds there will already be a seasonal lot marker by default when you enter the lot in build/buy-mode. To make it visible you need to enter the cheats named above anyway. You might need to switch one time between build/buy to unhide it.

This silver ball will be invisible in Live Mode. It is totally up to you where you want to place it. Choose a location that is easily accessible for you during the building process.

Only one Seasonal Lot Marker per lot is allowed - though the game does not explicitly prevent you from placing a second: Make sure you use only one!

Interacting with the Seasonal Lot Marker

Hold CTRL plus Shift and Leftclick the Seasonal Lot Marker to open its options pie!

During this tutorial we are going to explain most options in more detail.

The option Set Season switches the lot between several modes. It offers you several choices, the active mode is the pale one: 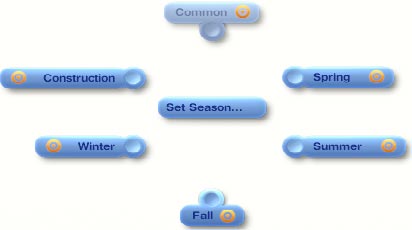 When and how lots change appearance 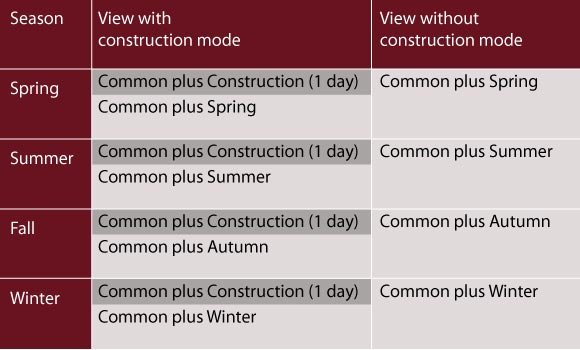 Working in the seasons modes

Switch through the seasons via the Option Set Season. Being in construction or in a seasonal mode all objects from common mode will be shown transparent: 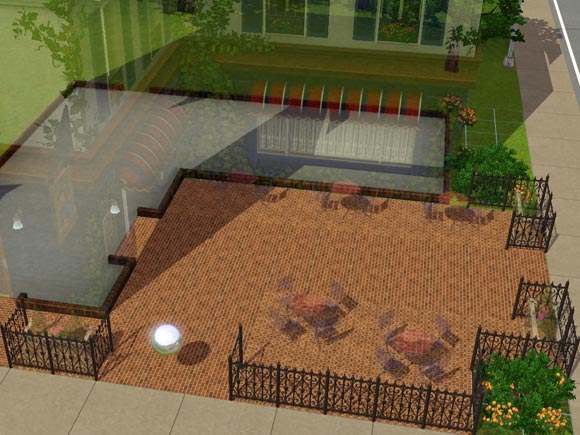 The following should be considered while working with the Seasonal Lot Marker:

If you click a transparent object it is pulled into the active mode. It's appearance changes to opaque. While still sticking to the mouse you can hit esc(ape) or the shortcut CTRL+z for undo. After placing a pulled object, it cannot be reassigned to the common mode not even with undo. If you pulled it by accident into the active mode, delete it, switch to common mode and place it there again.

Decorative objects can be placed in slots of furniture, e.g. flowers on a table. Unfortunately the first decoration blocks the slot of a common mode object: You can't use the same slot in several seasons to switch table decorations of common mode tables like decorating it with flowers, candles, sunshades. You could put tables (and chairs) in all seasonal modes instead. But deleting them on common mode gives a poor appearance for players without Seasons: They will see the empty common mode by default. It can be a bit tricky to find a working compromise.

Rasing or lowering terrain and all building actions (walls, floors, wall hanging, windows, doors and so on) even in seasonal modes will always be connected to the common mode and therefore be shown at all seasons. Make sure to especially finish terrain editing before you decorate the seasons modes. Changing the terrain later might lead to sunken or hovering decorations in other modes. You can repair those modes by picking up the objects with the hand tool and immediately hitting the esc(ape) button or by deleting them with the sledge hammer and undo it. Both actions put the objects back in their prior position with corrected hights.

Stones (from plant section) and colums - though in the build mode - can be placed in seasonal modes and will be shown only in this season. Fire pits/bowls from the party section cannot be places on seasonal modes - they will always be connected to the common mode.

Most items from debug > misc objects are tricky... they work just fine with seasonal modes if you build the lot just for youself. After exporting and installing lots with the seasonal lot marker, those objects might got lost or might show in all seasons instead of the one where you placed it. Same goes for seed(!) spawners. Plant(!) spawners work just fine! If you intend to make your lot downloadable you better won't use any misc objects from debug. This lot type needs lots of testing

For this tutorial I am going to place flowers on some tables at spring, a sunshade on one table at summer, candles on some tables on fall mode including some radiant heaters. Winter mode will go without decorations: 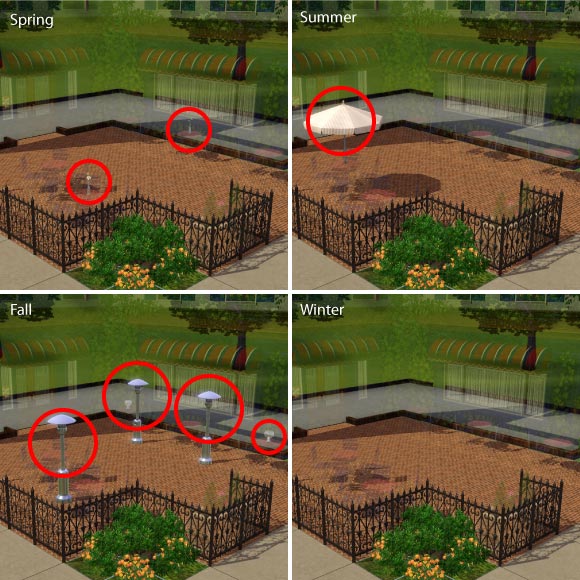 Clicking transparent objects with the Hand Tool pulls them into the active mode. Clicking them with the Eyedropper or Create-a-Style tool leaves them in the common mode. This allows you to easily match styles and objects in all modes.

Placing identical objects in more than one season

I am going to add some flower boxes and boxed trees to the Little Corsian Bistro from spring to fall: 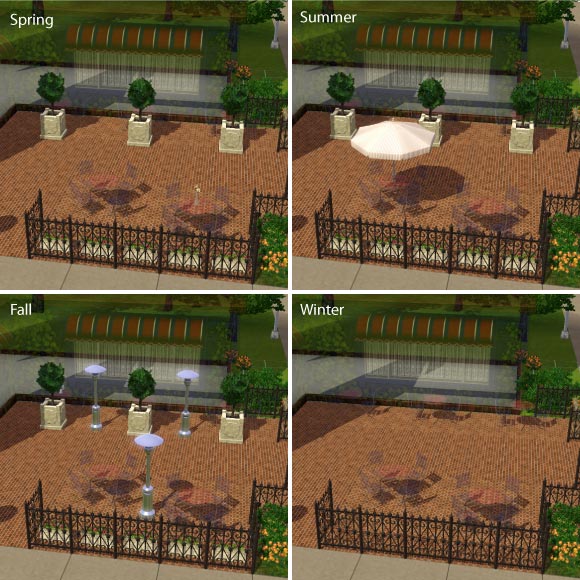 Small changes to the same object at all seasons modes

You want to use the same object with slightly different appearances or maybe lights with different settings in all modes? Place the objects in common mode as a template. Switch though all other modes and use again the eyedropper tool to copy the object to the active mode. Then change the material or light setting. When you placed the object in all modes got back to Common Mode and delete the object there.

I am going to add a sandwich sign to the Little Corsian Bistro from spring to fall advertising the seasonal specialities: 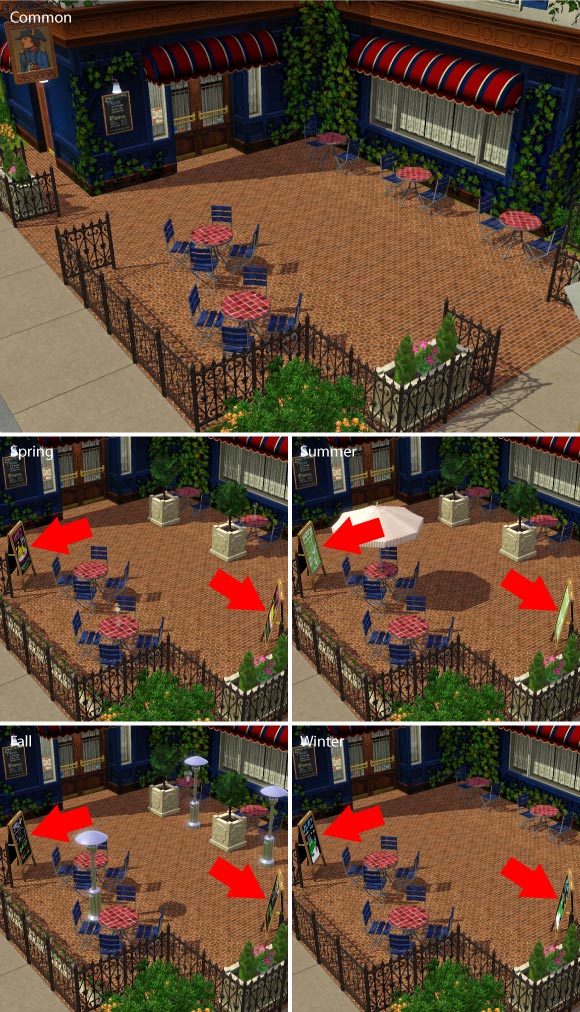 Before leaving Build/Buy Mode EA recommends to always click the Seasonal Lot Markers option to Lock the Common Objects in place. This eleminates reasons for game issues - even if the effect might not be directly visible.

Community lots allow to set different Names for each season. Those will be shown in the Live Modes Town View when Seasons is installed. Click the Option, choose the Mode and enter a Name.

Changing the Common Name actually changes the lot name - the one displayed in edit town mode. Leaving some or all names blank will show the common name in town view instead.

If you have Seasons installed the lot will show the according appearance. If Seasons is not installed the common mode will be displayed by default. If you want, you can change this to the appearance you prefer:

If not yet entered type the cheats TestingCheatsEnabled true and buydebug into your cheat console. This will make the silver ball visible when entering the Buy/Build Mode of the lot (you might need to switch between modes once to unhide it). Open the Seasonal Lot Markers options and choose Set Season and pick your choice. Switch back to Live Mode and your lot will show with the chosen season. Here you can see summer with all Common and all Summer objects visible in Live Mode: 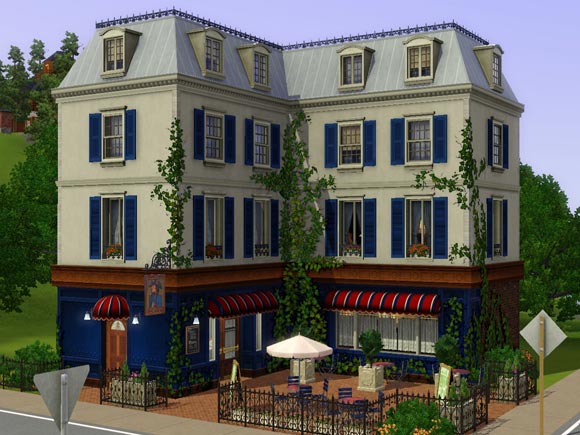 The marker is a very special object and cannot be easily deleted. If you place it by accident you can just undo this action. If you placed it a while ago or installed a downloaded lot - open again the menu pie of the marker and choose the option Delete It. Confirm the warning.

The deletion of the Seasonal Lot Marker immediately pulls all objects from all modes into view: 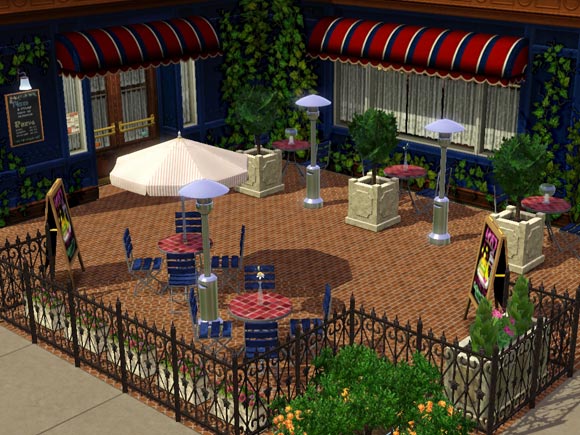 Objects might be stucked on top of each other. Clean your lot and delete all unnecessary objects to ensure function and accessibility of all objects.

Your turn! Have fun creating your own lot with changing seasonal appearances!

Please do us a favour and rate this tutorial with stars or vote with thumbs - thank you!

You have questions or suggestions? Please leave us a comment – no registration needed!
We'd like to ask you for your star vote!

This website uses cookies to improve your experience while you navigate through the website. Out of these, the cookies that are categorized as necessary are stored on your browser as they are essential for the working of basic functionalities of the website. We also use third-party cookies that help us analyze and understand how you use this website. These cookies will be stored in your browser only with your consent. You also have the option to opt-out of these cookies. But opting out of some of these cookies may affect your browsing experience.
Necessary immer aktiv
Necessary cookies are absolutely essential for the website to function properly. This category only includes cookies that ensures basic functionalities and security features of the website. These cookies do not store any personal information.
Non-necessary
Any cookies that may not be particularly necessary for the website to function and is used specifically to collect user personal data via analytics, ads, other embedded contents are termed as non-necessary cookies. It is mandatory to procure user consent prior to running these cookies on your website.
SPEICHERN & AKZEPTIEREN